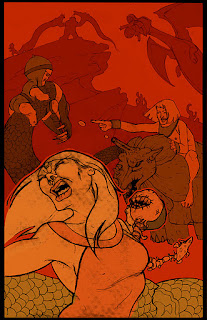 Herculoids! I couldn't find a way to fit in Zandor or Gloop and Gleep, which is a shame. Maybe there's another illustration in the works for them. Anyways, this piece shows them fighting the Snake Riders, which showed up in the series' second incarnation during the Space Stars show.

I probably need to lighten a lot of it, but I like how the colors interact with each other right now, so it'll probably take a lot of slider sliding to get it perfect, which I don't feel like doing right now.

Also I just noticed that I forgot to color in the inside of that cut open serpent in the foreground. Lotsa tweaking to be done on this one.
Newer Post Older Post Home